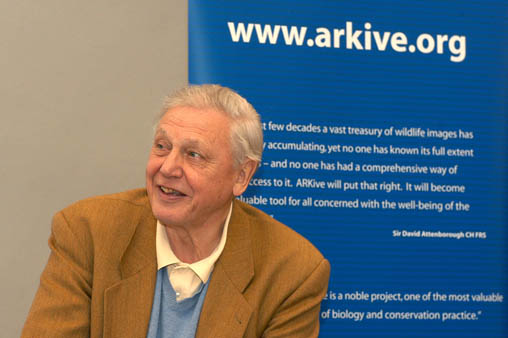 Discovered in Gabon, Africa, the new genus, Sirdavidia, was created to encompass and new species of flowering plant, Sirdavidius solannona, belonging to the custard apple family.  The international team found the specimen which bears fuchsia flowers, in Monts de Cristal National Park.  They chose to honor Sir David Attenborough for his considerable contribution to science and his personal influence on the many researcher involved in its identification, especially lead researcher Dr. Thomas Couvreur. According to Sci-News, Sir Attenborough was “thrilled” and responded:

“I know very well that such a decision is the greatest compliment that a biologist can pay to another and I am truly grateful.” (Sci-News)

Sir David Attenborough may be most recognized from his BBC nature features including Planet Earth, The Life of Mammals, and Blue Planet – all of which he wrote and narrated/hosted.

UPDATE: Sir David also has a species of hawkweed(a cousin of the dandelion) named after him, Hieracium attenboroughianum, which is found in the Brecon Beacons mountain range of Wales.  Named by taxonomist Tim Rich (likewise inspired by Sir Attenborough’s work), it is the only endemic plant to Sir Attenborough’s home of the United Kingdom to bear his name.

New Owl Species Identified In The Deserts Of The Middle East