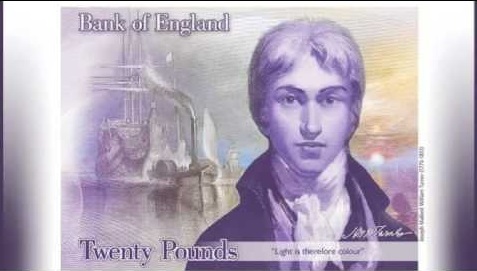 United Kingdom– The United States is not the only nation in the Anglo-American sphere redesigning their 20 unit paper currency. The Bank of England has announced the upcoming issue of the new £20 note will be adorned with the 1799 self-portrait of famous British romantic painter J.M.W. Turner. The newly designed currency is set to debut in 2020 and will be constructed of a polymer substance. The decision to feature Turner was announced on 22 April after an impressive competition to design the new bill with the image of an artist.

The Bank of England opened the selection process to the British public. In doing so, the nomination process gathered exactly 29,701 submissions. Yet only 590 of the submissions were in fact artists. (See: “Boaty McBoatface“)

The current £20 note portrays famous Scottish economist, philosopher, and author of the noted work “The Wealth of Nations,” Adam Smith. The new note will not simply feature Turner, but its background will include Turner’s famous work, “The Fighting Temeraire.”

The final decision fell upon the Bank of England’s governor, Mr. Mark Carney, who also served as the decision committee chair.

In a statement given by Mr. Carney, he explains his logic regarding the selection of Turner among countless other worthy candidates:

“Turner is perhaps the single most influential British artist of all time. His work was transformative, bridging the classical and modern worlds. His influence spanned his lifetime and is still apparent today.”

“I would also like to take this opportunity to thank all the people who got involved in the process and that sent us their suggestions for visual artists to celebrate. The range and breadth of these nominations is testament to the UK’s achievements in the arts and the public’s passion for it.”

Mr. Carney’s statement demonstrates how a country’s currency acts as a cultural reflection in its society. From the Caesar’s that adorned Roman coinage in antiquity, to the portrait of the current U.K. Monarch, Queen Elizabeth II, which is updated each decade to reflect her age on the currency used in the Commonwealth of Nations, most every society uses the images on their currency to highlight the most prominent figures in their culture.  Additionally, the appearance of any country’s currency communicates internationally a society’s current attitudes.

“I will take my change in Tubman’s!”

As previously mentioned, the U.K. was not alone in its decision to undertake a major facelift on its paper money. The United States Department of the Treasury’s decision to replace the seventh U.S. President, Andrew Jackson, on the front of the $20 bill with legendary abolitionist, former slave, Underground Railroad and Civil War heroine Harriet Tubman is a landmark decision in the U.S. Tubman is also set to debut on the $20 bill in 2020.

Tubman is not the first woman to grace U.S. currency. Susan B. Anthony, famous for her role in the U.S. woman’s suffrage movement appears on a U.S. half-dollar coin. Golden $1 coins also depict a woman: Sacajawea, a member of the Lemhi Shoshone Trive whose work made possible the Lewis and Clark expedition.  Harriet Tubman now joins their ranks as the first woman to be featured on U.S. paper currency and the first African-American to receive the honor.

With these prominent impending changes to these power-house nations in the Western world, the appearance of currency remains a strong reflection and self-critique of the popular cultures of the nation states that issue them.